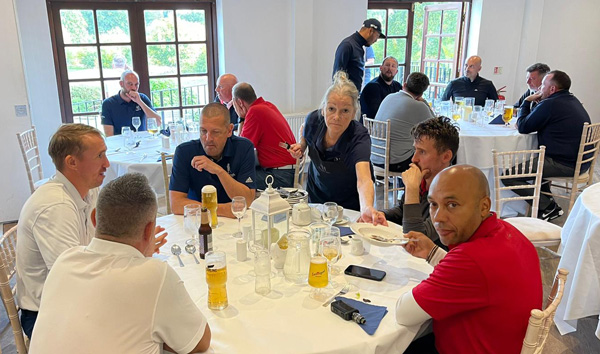 First off, well done Barrie for all your hard work.  Meatballs made a change and worked a treat.

These days don’t just “happen”, even the night before I understand we had slots being filled and last minute changes made.  Day went very smoothly, all teams were sorted, weather arranged to be bright and sunny, but someone forgot Johnny Harris’ gag… maybe next year 🙂

Cracking turnout by all clubs, I think just one or two slots need filling the night before and we had one team of four ball (featuring Farleigh’s very own Brad “Pitt”) who scored very well despite being a man down.

Format for the day was 5-man scramble, ideal for the not-too serious, social day of golf.  I was subbing in with the vices on the day and we had a cracking day running in 16 under but pipped into 2nd spot by TeamLoveless et al who I think were just about on our score but nudged it with handicap.  Congrats the winners on the day, enjoy the prizes.

Main event was awarding Harry and the Farleigh team with the trophy for winning the Men’s 2022 league with an unsurpassable 8-nil record… first time I believe that has been done.

As an old-hand at the league, the old saying used to be “win by 7 at home, lose by less than 7 away”… well those days are past and whilst the odd big result does have a say in the final standings, winning all 8 matches (4 home 4 away) is a fantastic achievement.

Next year we have finals day at Woldingham (and the year-after Surrey National).

So lets have another strong league year in 2023, continue to see more new faces getting involved and I’ll see you at Woldingham next October.