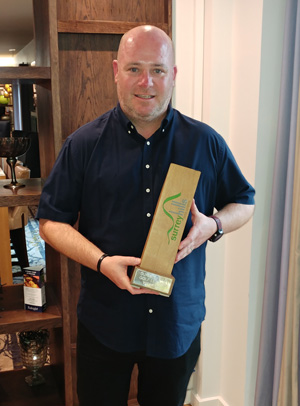 Firstly, I’d like to thank all the other teams within the league for the competitive matches that were played this year. Unfortunately, our last match against Surrey Downs could not be played due to the course being waterlogged and closed by their head green keeper. We did have a healthy 30 point lead on Reigate Hill, so there were no arguments raised in the draw that was awarded.

Secondly, I’d like to say a massive thank you to everyone that has played and supported our victory and special thanks to James Carter my Vice Captain for his support. Hopefully, James will accomplish the next hurdle, which will be to retain the trophy next year with his Vice Captain Robert Hance. Good luck gents!

There were many new faces introduced into the squad this year, which saw 21 players used in total, so I’m hopeful we get many more members for next year!

This year finals day was held at Farleigh and unfortunately the weather did us no favours on what is always a tricky course in the best of weather.

Surrey National were supported by 17 members, but many apologies to Kevin Perry who was unable to play, due to the buggies being ruled out on the day.

I went out with the Captains from three of the other clubs and the chairman Chris Coates from Woldingham who took the place of their Captain.

We struggled to make any birdie putts until we played our fourth hole, which was closely followed by another, but then came the 488 yard par 4 into wind. Driver, three wood and 105 yard wedge into green which led to a bogey, which most groups also suffered on. I think I heard that one group even took three woods to get on the green at the end of their rounds!

Then came out the 1000 calorie sausage roll with a bottle beer (nice touch from the Farleigh Captain Tom) to give us boost in the sideways rain.

We managed to finish the front nine 1 under par and thought we had a reasonable score, noting how tough the conditions were.

The conditions on the back nine got better and the course played a lot easier, so we came in with a total of six under par and hearing the first few scores, we knew we weren’t taking any of the prizes.

Mr Jaggs five ball won the day with a very impressive 9 under par and were rewarded with £150 vouchers to spend in the Farleigh Pro Shop. Ross’s group came in second place very close behind.

Again, thanks to everyone who has supported me and please continue to support James next year, so we can retain trophy.